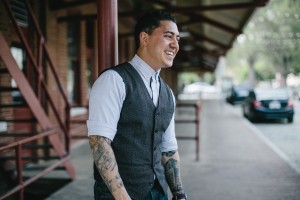 Where are you originally from and how long have you lived in the Triangle area?

I’m originally from Egypt… We moved to the suburbs of Washington DC in the mid 80s and that’s where I went to grade school.  I attended ECU for undergrad, moved to Cali for a short while because I thought I might like it… I didn’t.

So I left quickly and began my professional career in NY City where I spent 6 doing corporate sales by day and Bartending /DJing at night.

In search of a better quality of life, With just a plane ticket and 1 bag of clothes I and came down to Raleigh to start fresh. No car, no house, no friends.  I couch surfed, found some odd jobs to get on my feet, and slowly began building from scratch. That was 4 years ago this week!

Do you feel as though this region has become more diverse in the last 10 years?

I can’t tell you about 10 yrs ago but I have seen some major changes in the 4 years that I’ve lived here.  It’s a new and exciting time in North Carolina… We are starting to see outdated laws that infringe on civil rights start to be overturned, international businesses flooding RTP and Raleigh,  low barriers to entry / taxes for small business owners with fresh concepts, and some major colleges and universities that are attracting international bright students to the area. All of that has a direct effect on diversity.

With an influx of such a variety of cultures and ethnicity to this area do you think this may pose a threat to Southern traditions?

I don’t think it’s a threat so long as the existing culture is honored and represented.  There are some beautiful aspects of southern culture and some great businesses  and food spots that do an amazing job representing the south.

But it’s also important to have multidimensional, multicultural community to promote diversity and acceptance and drive out ignorance and intolerance.  See living in NY city, it seemed there was a cafe, restaurant, parade, or market for every culture in the world in every neighborhood of every borough…But that never threatened the pizza shops, the theaters, the music scene, the fashion district, or any other part of NY culture.  Raleigh won’t be any different.

Is it important to try to protect Southern traditions or do we just roll with the changes without trying to preserve?

I think it’s important to preserve existing traditions as we promote the new.  No culture is superior to another.  But the beauty lies in understanding and appreciating the contrast.

Are there family traditions that you feel important to carry the torch on?

My dad used to make us all have dinner at the same time every night. Everyone had to be there. Which meant I had to leave my friends house and come home…. Which meant the TV had to be off. Even every light in the house had to be off except the light shining over the dinner table. I don’t know if he did that part out of being frugal w the light bill or the symbolism of all focus being on the table… I wouldn’t ask.  I didn’t realize the importance of that tradition then… It just felt forced. But it’s something I will carry on.

Do you think of food as a form of communications?

Is there a dish/juice that you’ve made or make that sort of sums up your style or your background? I guess a signature dish perhaps that really gives people a glimpse of your personality.

What would you consider your “soul food”? What type of food really speaks to you or comforts you or is a strong food memory that can make you reminisce whenever you enjoy that dish?

All the signature Egyptian dishes… I grew up on lots of purees with olive oil…  Hummus (chick peas), foul (fava bean) , tahini (sesame) , baba ghanoush (eggplant) … All of it is eaten with pita bread… No utensils.

Even when I moved out on my own I continued to eat like that. My college roommate, Jon would clown me saying it looked like throw-up. He’d be like “what’s THAT !??” I’d be like “foul”… (It’s pronounced fool) so he would say “yeah because you gotta be a fool to eat something that looks like that.”  … Maybe I wasn’t making as well as my grandma.

Sometimes people will simplify or strip down a recipe or a menu in order to appeal to a particular audience.  I think this can be a very tricky balance.  Has there ever been a time that you’ve felt this pressure in order to be more marketable?

I agree … A  tricky balance indeed.  Our early juices were potent! Lots of greens, heavy ginger, bitter, full of nutrients with little fruit.  I call them “NY style juices” But early adopters gave us quick feedback that the consumer base in NC was not ready for that.

We adjusted our recipes to make them more commercially viable… Less ginger, more green apple, lemon. But they are still mostly veg based.

Most companies do mostly fruit with little veg so most consumers have a palate that is trained to draw towards sweetness. We want people to realize that they can retrain / evolve their palate in just a few days time.  You’re a grown up now… Eat like it.

How did you get into juice!?

In NY city juice bars are as common as coffee shops. When I moved to Raleigh I immediately noticed there wasn’t even 1.  Juicing has become such an integral part of my daily routine, I found this a huge disruption.

So I had to make my own juices at home every day which is so time-consuming. At the same time I was teaching my dad to incorporate juice and smoothies into his diet to help him with his cancer and diabetes by reducing his insulin levels and raising his alkaline /PH levels.

It become clear very quickly that there was a void in the local market and I was best suited to fill it.

Sometimes there’s a learning curve that has to occur in order to slowly gain acceptance with customers are there ways that you’ve tried to subtly educate?

We set out to educate in the beginning but we found that instead, it was more important for us to devote our limited time and resources to creating the best quality organic juices.  We didn’t wanna be the Jehovah witness knocking down doors.  We host educational content for this who want to seek it out. We educate via blogs, our website, and community events, but for the most part, our regular customers take on the task of educating the public.

We found that we would best serve the community if we focused on the product rather than convincing people why it was important… With a great product we now have many voices passing along our message … Not just us. And when it’s our customers advocating for us, there’s more trust because there’s no bias.

Which artist will always show up on your soundtrack?

Stevie wonder ! I also like the modern day soul singers like Aloe Blacc and John Legend but anyone who knows me knows of my affinity for Stevie Wonder music. And anyone who has lived with me or has partied with me, has been force-fed some Stevie!