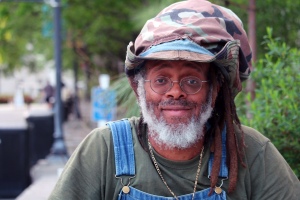 1)      Where are you originally from and how long have you lived in the Triangle area?

I’m originally from Cleveland Ohio and I’ve been living in the triangle for three years now.

2)      Would you consider the Triangle area to be a diverse place compared to other places you’ve lived?

It’s about as diverse as any other place. It’s not a New York, Chicago or San Francisco, but it’s enough to get by.

3)      Do you think that Southern traditions are threatened by an influx of “outsiders” (Northerners migrating south, as well as a larger immigration population)?

Threatened is a pretty big word and you gotta look at the word “threatened” and ask yourself the context of what you mean. Suffice it to say, perhaps some people in the south feel threatened by the gentrification of the south by people from the north and immigrants from other countries. If that’s the case it’s pretty interesting. On the other hand if it’s not threatening perhaps you can look at it as a new type of colonialism and that new ideas are coming from different parts of the world bringing ideas and reasoning’s to an area that haven’t changed its paradigm for 400 years.

4)      Is it important to try to protect Southern traditions to preserve its identity or do we just roll with the changes without trying to preserve?

I believe it is important to try to protect traditions because these traditions mean something to some people. At the same time we have to look at other cultures that are here in the south trying to preserve their own traditions. As these traditions are addressed, I think it needs to be in a uniform place in which a logical form of ideas and traditions can be discussed, shared and practiced. Respect for tradition, no matter how crazy or flippant must be at the core.

6)      Do you think that Urban Agriculture practices could really save inner city areas that are considered food deserts? If so, in which ways?

Yes indeed. My job for the past 25 years has been to cultivate community and by cultivating community we are avoiding such negative words like “food desert”. And instead we are putting in positive words like “cultivating the wetland”. So let’s look at the phrase “cultivating the wetland” as we cultivate the possibilities of growing community. I will mention a few cities that have cultivated their communities to greater success using urban agriculture as a model. Number one, Cleveland, Ohio. Number two, Detroit, Michigan. Number three, Pittsburgh, Pennsylvania. Number four, Youngstown, Ohio. Number five, Chicago, Illinois. Number six, New York City and the five boroughs. Number seven and 8, Montreal and Toronto Canada. Number nine, Louisville, Kentucky. Number 10, and last but not least Atlanta, Georgia. All one need do is Google urban ag with the cities that I just mentioned and see what pops up. All of these cities and so many more have taken the challenge to not accept the status quo of low food access and food insecurity. It all comes down to people, policy and politics. The people have the voice and their voices need to be heard. The policies need to be changed and archaic laws that don’t fit the communities needs anymore need to be addressed. And lastly, the politics of it is if you’re not part of the solution you’re part of the problem and thusly you’re going to have to go.

7)       Farming is really hard work, it’s hard to sometimes motivate people to do work.  How do you get people to “buy in” to the idea that farming where they live is a good idea?

Show and prove. It’s as simple as creating the example and then duplicating the example 10, 15, 25 times. And even more than 25 times.  Please look at the major cities that I mentioned that have had and are having success with urban agriculture. They have all duplicated their successes numerous times. Please quote me on this … “Success is the biggest buy in.”

I got into farming back in the late 80’s when my oldest son was born. I flashed back to my youth and remembered that my dad grew flowers in the front yard and veggies in the back yard and he also grew fruit trees, nuts and berries on railroad property across the fence.  I want to duplicate what my dad had shown me as a kid for my son.

9)      I think you’re probably compost’s biggest fan.  Why are you so passionate about compost?

It gets back to that “success is the biggest buy-in”. With composting you see success pretty rapidly. You see results in your plants and you feel the energy from the nutrient density that the soil has because of the composting that you’re doing. I like results. Composting gives me results.

10)   There have been a ton of stories in the media recently about social injustices and poor race relations between minorities or people of color and law enforcement agencies around the country.  Do you think that urban planning which would take urban agriculture into consideration could improve this situation? If so, How?

I get paid as a consultant and that question is on the level of politics, policy and people so I can’t answer that in a public forum. Urban planners should know what to do as they’ve been “trained and educated” on these issues. Or have they?

11)   What would you consider your “soul food”? What type of food really speaks to you or comforts you or is a strong food memory that can make you reminisce whenever you enjoy that dish?

My soul food is something that has come out of my yard, my cousin’s yard, my mom’s yard. Homegrown or foraged…. That’s my soul food.

12)  If someone is new to gardening and would like to start, do you have a favorite vegetable or fruit you might suggest they begin with?

Lettuce is that crop that I really enjoy. We’ve always been a family to grow good lettuce and lettuce is pretty much everything as it’s served pretty much with every meal. It’s all about the color. The texture. The flavor and much, much more. Garlic is a very close second.

13)   Which artist will always show up on your soundtrack? 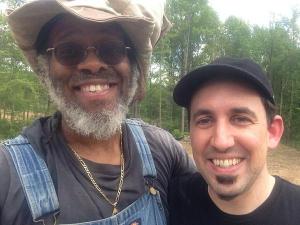